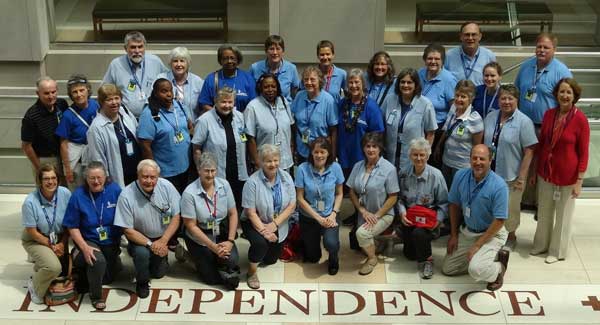 Caring for children after disasters has been a ministry of the Church of the Brethren since 1979, when Disaster Response Director R. Jan Thompson noticed children waiting in line with their parents for disaster assistance. The waits were long in the hot sun, and if parents got out of line to tend to their children, they lost their place. Fights broke out while people waited and at that time, there was no bottled water or food distribution for those who were waiting. Jan realized that these conditions were creating a different kind of disaster for the children.

A team of psychologists and educators was gathered, and the concept of Children’s Disaster Services was created. A volunteer workshop was developed and the program was underway, providing volunteers to care for children after a tornado in May 1980.

Since then Children’s Disaster Services (CDS) has grown into a strong network of volunteers and partners across the country. Since that first disaster response in 1980, over 3100 volunteers have cared for more than 87,800 children in response to over 230 disasters such as floods, earthquakes, hurricanes, fires, ice storms, tornadoes, mudslides, terrorist attacks, and aviation incidents.

See the current statistics for CDS in our yearly Bridges newsletter, winter edition.

As CDS moves forward, efforts are being made to create a more agile, flexible response with a focus on local connections. This can serve to be effective in the ever-changing world of disaster response, while at the same time maintaining a commitment to compassionate, playful care that supports resilience and healing for the children and families served.