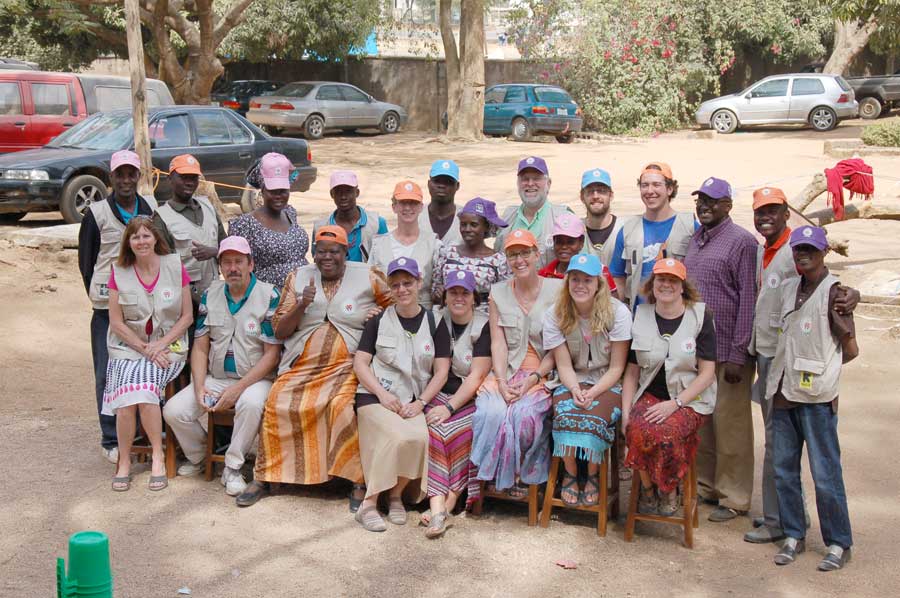 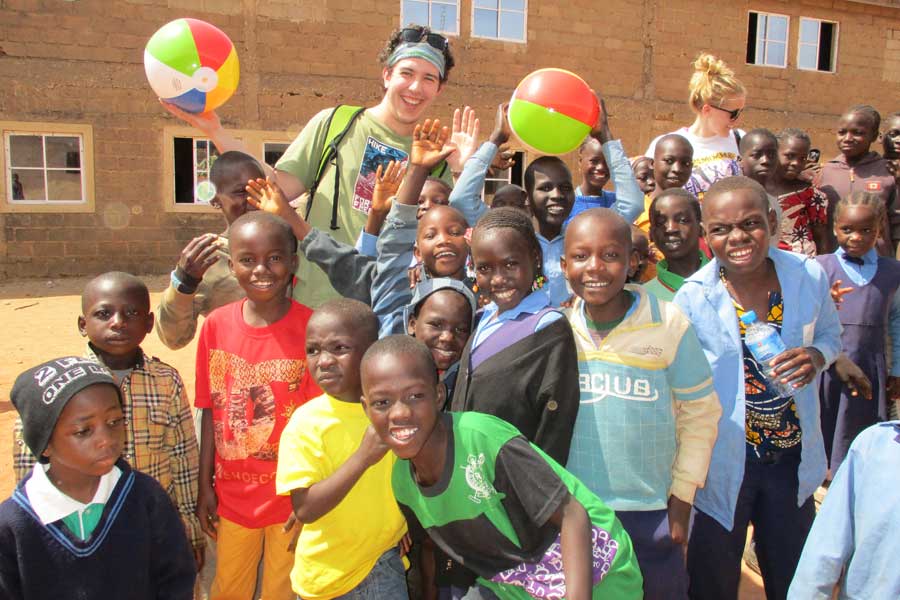 Elizabethtown group members with children in Nigeria. (photo by Carl and Roxane Hill) 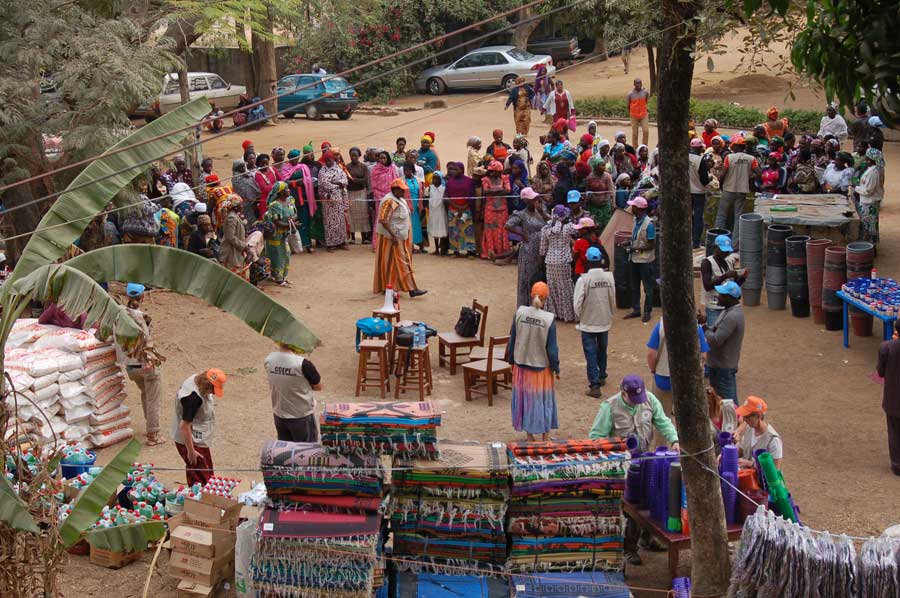 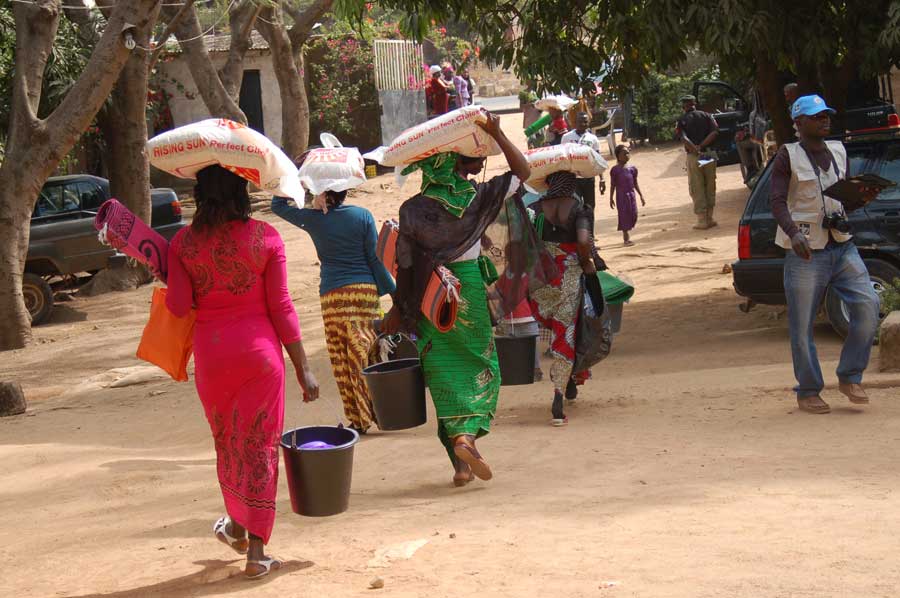 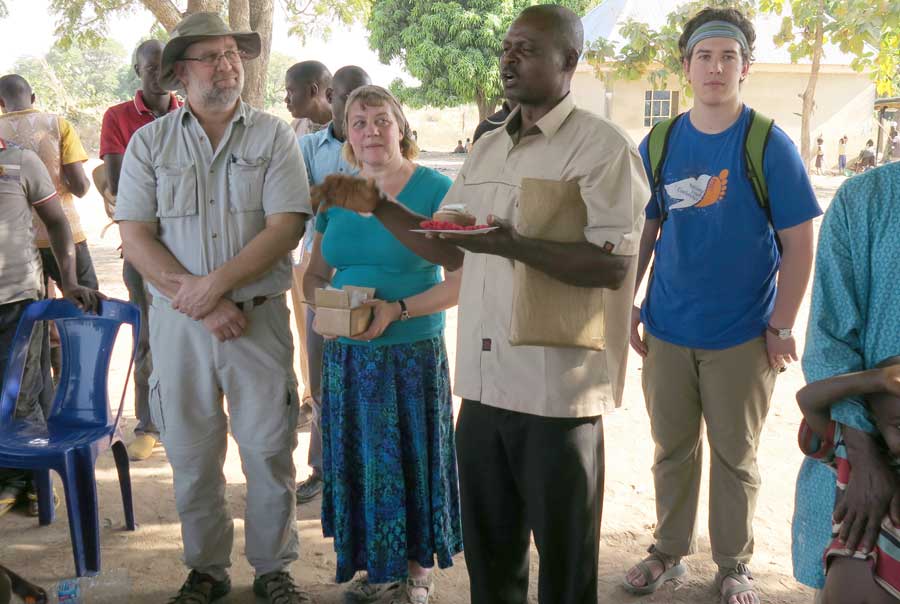 In the Church of the Brethren’s first group trip to Nigeria since the crisis of violence by Boko Haram reached extreme levels, 10 members of Elizabethtown (Pa.) Church of the Brethren spent two weeks there in January. Pastor Pam Reist led the team, which we accompanied as co-directors of the Nigeria Crisis Response.

Everywhere we went, people welcomed and prayed with us. We were dipped in prayer the entire time. The Nigerians showed us what it really means to be a praying people. “For some of us, the praying got us out of our comfort zone, but by the end of the trip, even I found myself praying out loud,” said Karen Hodges. “It was contagious.”

Our two Nigerian companions on the trip were Markus Gamache, staff liaison for Ekklesiyar Yan’uwa a Nigeria (EYN, the Church of the Brethren in Nigeria), and Joshua Ishaya, a student at Kulp Bible College. Both provided immense help for us “batures” (white people) as we all needed assistance navigating in a different culture, complete with language barriers.

After arriving in Nigeria’s capital, the team was hosted for several dinners by the leaders of the EYN church in Abuja, who donated the church bus for our travel, and by the Brethren Evangelical Support Trust (BEST) group. It was the BEST group that sponsored and accompanied the EYN Women’s Fellowship Choir on their tour in the United States last summer.

We visited two “care centers,” new communities built for the displaced people of the northeast. “We had some time to spend with the children,” remarked Deb Ziegler, who led some of the children’s activities. “It was really precious to see the smiles on all the children’s faces.”

The second week was spent in Jos, a city in the center of the country. EYN leaders welcomed us, and the team became the first occupants of the newly constructed “Unity House” built especially for Church of the Brethren visitors. During our stay in Jos, EYN leaders tried to familiarize us with the critical work of keeping the church going during a time of crisis and upheaval.

Our team split up and attended three different church services in Jos. Each group experienced something a little different. Some attended an English service and others went to Hausa services. Pastor Pam Reist got an opportunity to preach, with Markus Gamache translating into the Hausa language. “We wanted our Nigerian brothers and sisters to know that we had been with them in spirit, and now we were united in both spirit and physical presence,” she said. “We are one body in Christ . . . mun daya ne cikin Kristi.”

We assisted Dr. Rebecca Dali of the nonprofit group CCEPI with distribution of food and household items to displaced persons. Each member of the Elizabethtown group helped distribute items, had a chance to look recipients in the eye, and gave words of encouragement. In all, 470 women received relief items; 342 of them were widows.

A highlight was a visit to a school in Jos that is sponsored by the Church of the Brethren. This school is home to more than 100 orphans from the northeast. Our group presented a Bible story for the children and some fun activities including a soccer game between the adults and children.

Throughout the two weeks, there were many opportunities to listen to heart-wrenching stories that the Nigerians were willing to share. Real ministry took place as these people truly felt encouraged by their American brothers and sisters.

The gift of presence

We were going to Nigeria to listen, learn, comfort, and encourage. My life experiences have prepared me to do just that. As an occupational therapist in early intervention my goal is to listen to parents and children, to learn what is going well in their daily routines and what is challenging.

Another life experience that influenced this trip was the unexpected, accidental death of my son, three years ago. He was 19. The support that others have shown to our family, and my personal journey of grief and forgiveness, deep loss, and search for meaning are part of who I am and what I have to share.

I often thought how much more my Nigerian friends have endured. Not only have they lost loved ones— by no accident but at the hands of violence—but they lost homes and churches, jobs and resources. Many fled for their lives with only the clothes on their backs. And it was not just one family suffering, but all.

How do you lift one another up, when everyone is grieving? I tried to clear my mind and be present in the moment.

One morning we visited the Gurku interfaith camp of Christian and Muslim families displaced by the violence. We met a family who recently had a sickness. Carl Hill asked me to pray. Roxane Hill whispered to me that the family had suffered a miscarriage.

That is all I knew—no names, no faith background, no other details. I knelt down to meet the woman where she sat, unable to stand, and I prayed for God’s grace and healing, for strength and courage, and for God’s goodness. I do not know if they understood English but they understood the prayer, the touching of hands, and the tears. I have to believe they understood I was sharing with them in their sorrow and they understood my message that God holds all our children in his hands.

And the tears of compassion continue. I have learned the Nigerian way of answering the question, “How many children do you have?” “I have two children, one is living.” That is a healing way for me to confront that sometimes difficult question.

We were told that love is in the feet. The journey of the feet is what we were a part of during this trip.—Deb Ziegler

The importance of prayer

In Nigeria we heard stories from women, men, and children who have experienced tragedies in their lives that are almost beyond belief. Homes and churches burned to the ground, husbands and sons murdered, and daughters and sisters abducted by Boko Haram. For many Nigerians, it is belief in God and the power of prayer that gives them the strength to hope. The prayers we experienced and that I grew to appreciate, were spoken, spontaneous, unrehearsed, often long prayers. I learned to deeply appreciate these prayers, especially from those who have suffered in unimaginable ways.

On New Year’s Eve we attended a “Crossover Service,” crossing over from one year to another. The service included beautiful music from several choirs, including our own Elizabethtown Kumbaya group, and a sermon. The highlight for me was the end of the service when the pastor invited people forward, asking them to pray for a specific topic in their tribal language. Pastor Pam Reist was among the few invited forward and she prayed a beautiful prayer for the schoolgirls abducted from Chibok.

Although I could not understand the languages, it was obvious the prayers were meaningful to those who could understand. It was a beautiful way to bring in the new year.

Our belief in God, and the power of prayer, whether spoken out loud or silent, give us the strength to have hope for tomorrow. -—Karen Hodges