“I cannot be with my family or in my home in Bethlehem,” wrote Elaine Lindower Zoughbi in an emotional Facebook post on April 5, 2019. Some 60 hours previously she had flown to Tel Aviv, Israel, on her way home to the West Bank—only to be forcibly sent to the United States. She was detained at Ben Gurion Airport, held for some 12 hours, denied entry, and deported.

It was in the late 1980s that Elaine Lindower first went to live in Israel and Palestine as a young Brethren Volunteer Service worker from Indiana. There she fell in love with Zoughbi Zoughbi, a Palestinian from the West Bank city of Bethlehem, an area under the control of Israel’s military. They married in 1990 and she made his home her home—an ancestral home near the Church of the Nativity, in a place inhabited for hundreds of years by many generations of his family.

The family maintains its roots in the Church of the Brethren as well as Zoughbi’s faith tradition, the Melkite Greek Catholic Church. Their roots in the US are based in Indiana and at Manchester University. Elaine and her mother, Margaret Lindower of Prince of Peace Church of the Brethren in South Bend, as well as her late father, three sisters, and several aunts, uncles, and cousins are alumni. Two Zoughbi sons have earned Manchester degrees—Lucas in 2017 and Tarek in 2015. All four of the Zoughbi children have attended college or university in the US.

There are deep roots in peacemaking on both sides of the family. As well as Elaine’s service in BVS, Zoughbi is founder of the Wi’am Palestinian Conflict Transformation Center. In 2019, Lucas Al-Zoughbi was confirmed by Annual Conference to serve on the board of On Earth Peace.

Throughout 30 years of married life, Elaine has made her home in Bethlehem but also has traveled to the US for periods of time for various reasons including earning a master’s degree in nonprofit administration. She also has had to return to the US to renew her tourist visa to continue living with her husband in Bethlehem. This was necessary because she has been denied permanent resident status by Israel.

For the first five years of their marriage, the couple regularly applied for what is called “family unification” for Elaine to become a legal resident. “Between 1990 and 1994 we applied for family unification about every six months, and each application was denied,” Elaine said. “Then, with the Oslo Accords, spouses of Palestinians married between 1990 and 1993 were able to pay for visa extensions for one year, and then re-apply and pay for another one-year extension before having to leave the country.”

Although the new rules allowed her to get regular tourist visa extensions, it was expensive. “We have to pay every time, sometimes for the family unification application and sometimes for the visa extension,” she said, “but it meant that I could stay for a consecutive 27 months.” Included in the cost was her airfare to the US because she had to exit Israel to receive another tourist visa. The process included applying for a 3-month automatic visa on entering Israel, and then applying for two 12-month visa extensions.

Then, in 2017, she was denied the 12-month visa extension. At that point, she began experiencing real efforts to prevent her from living in the West Bank, including delays or a complete lack of response to her applications, culminating in visa denials based on spurious excuses. She contrasts her experience to that of American friends married to Israelis, who received permanent resident status within a few months of their marriages.

During the long hours in custody in Ben Gurion Airport, she finally heard a border control officer voice the truth. The reason she has been denied visas and permanent residency? “Because you are married to a Palestinian,” he said.

Elaine gives Israel some credit for giving permanent resident status to a small percentage of foreign spouses of Palestinians. “About 2,000 per year receive it, out of 30,000-plus who have applied and have not been approved.” She added, “I’ve never met a spouse [of a Palestinian] who has received this status.”

Haaretz, a leading newspaper in Israel, told Elaine’s story earlier this year. It reported “the same uncertainty . . . afflicts thousands of other people in her situation, foreign nationals who are married to Palestinian residents of the West Bank and Gaza, and depend on tourist visas from Israel, because Israel ignores their right and applications for permanent resident status.”

According to +972 Magazine, a nonprofit offering independent journalism from Israel and Palestine, the pressure on spouses of Palestinians is part of a policy of Israel “to keep foreign nationals out of the West Bank.” It affects “partners of Palestinian residents of the West Bank, parents of children who are West Bank residents, and people who have been working in the occupied territories for many years.” It includes denials of work permits as well as denials of visa applications, and the results are significant: “In a single stroke, two words—‘request denied’—are jotted down on a little note that is attached to an applicant’s passport. Within seconds, these people become illegal residents of the very place they had lived and worked for many years, and suddenly face deportation. . . . Entire families find themselves in an impossible situation, where Israel leaves them with one option—to leave.”

Since April last year, Elaine has twice managed to return home to Bethlehem by making applications to the Coordinator of Government Activities in the Territories (COGAT, a branch of the Israeli military). The application process takes up to 45 days, with no guarantee of success. She received two entry permits for three-month periods, in early summer 2019 for the wedding of son Lucas, and again in the fall. She and her family had to come up with a bank guarantee of $20,000 (70,000 Israeli New Shekels) deposited into a bank account of the Israeli military. They forfeit the money if she stays beyond the three-month visa period. Her travel is restricted to Areas A and B, less than 40 percent of the West Bank.

Because she has been banned from Ben Gurion Airport, she must enter through the neighboring country of Jordan. It is a long and messy journey.

Last summer she traveled with her daughter and they endured lengthy waits at the Allenby Bridge crossing point and difficult conversations with border authorities. They had to plead with officials to honor her entry permit. The COGAT permits allow a four-day window for entry into Israel. Last October, while waiting in Indiana for a response to her application, COGAT sent notice of approval on the first of those four days. She immediately flew to Jordan in an effort to cross the bridge in time—only to find it closed for the Sabbath. She spent a night in Jordan and managed to cross very early the next morning, arriving in Bethlehem on the last day she was allowed in.

Early in 2020 she must leave again. She will find herself back in the US, at the mercy of the Israeli military, with no way of knowing when she will be permitted to return to her husband and her home.

Since her deportation in April, Elaine has been outspoken about what it means to be an American married to a Palestinian. She has given interviews to media. She has posted frank messages on Facebook. “Sadness and despair have been met with overwhelming support and love,” she wrote in one of those posts. “I have been messaged, called, and contacted by friends, family, and even strangers. They all have decided to share with my family’s pain, offer words of love, encouragement, and support, and take action to help spread awareness and put an end to this injustice.”

“Besides this one event,” wrote her son, Tarek, on Facebook, “my people, my family, and I still suffer the other realities and consequences of occupation and of living life under systems of oppression and injustice.

“I could be romantic and say this about family reunification: Love is one of Israel’s greatest security risks.” 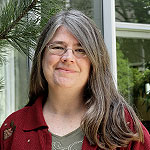 Cheryl Brumbaugh-Cayford is director of News Services for the Church of the Brethren, and associate editor for Messenger. She also is an ordained minister and a graduate of Bethany Seminary and the University of La Verne, Calif.