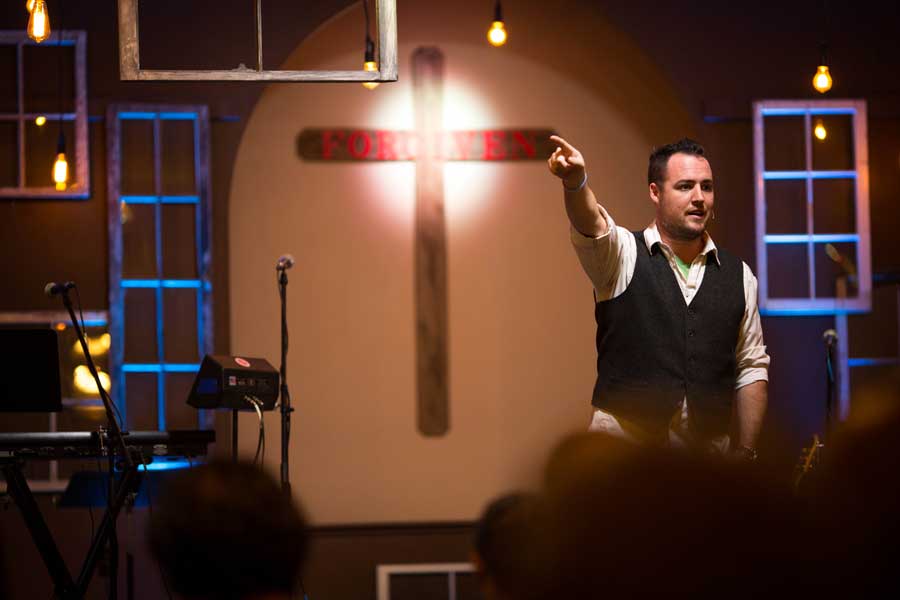 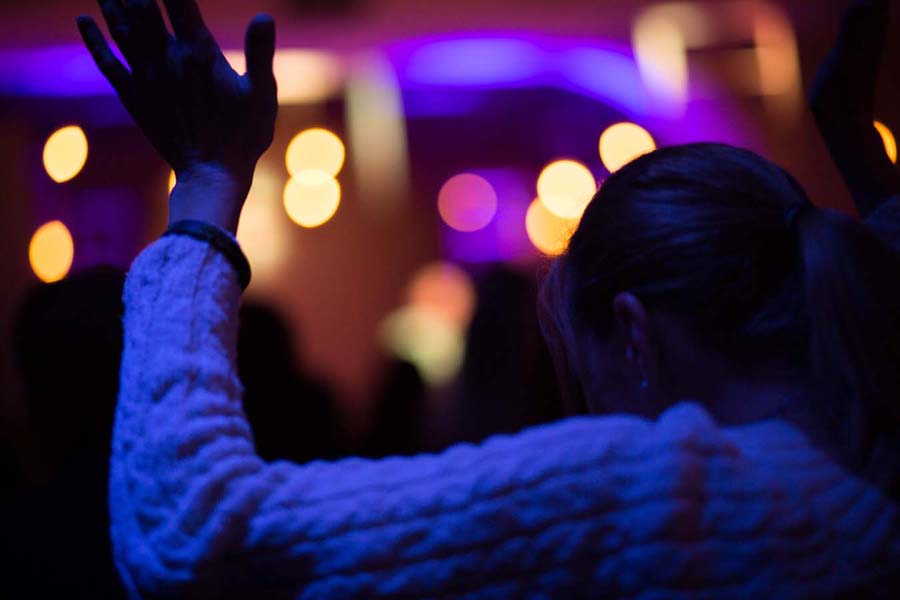 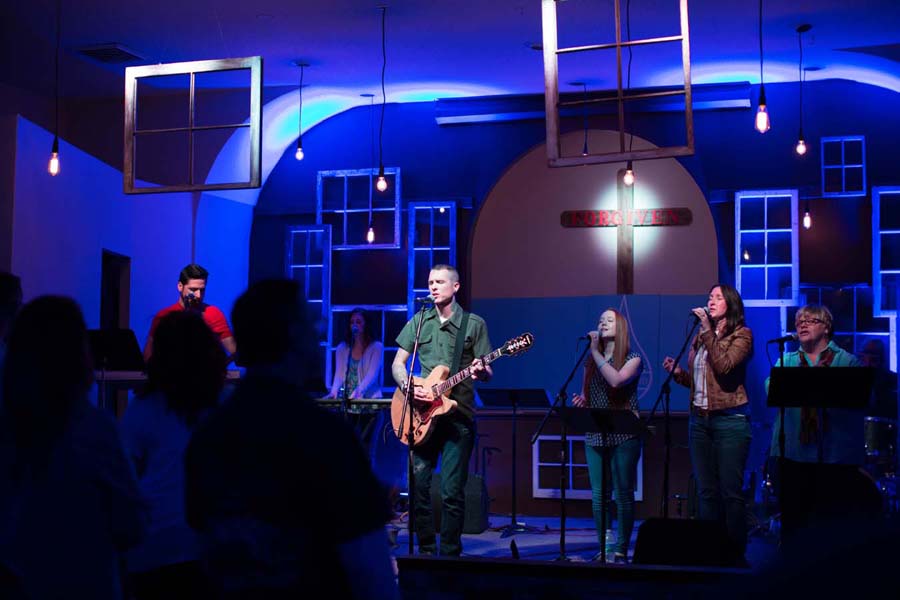 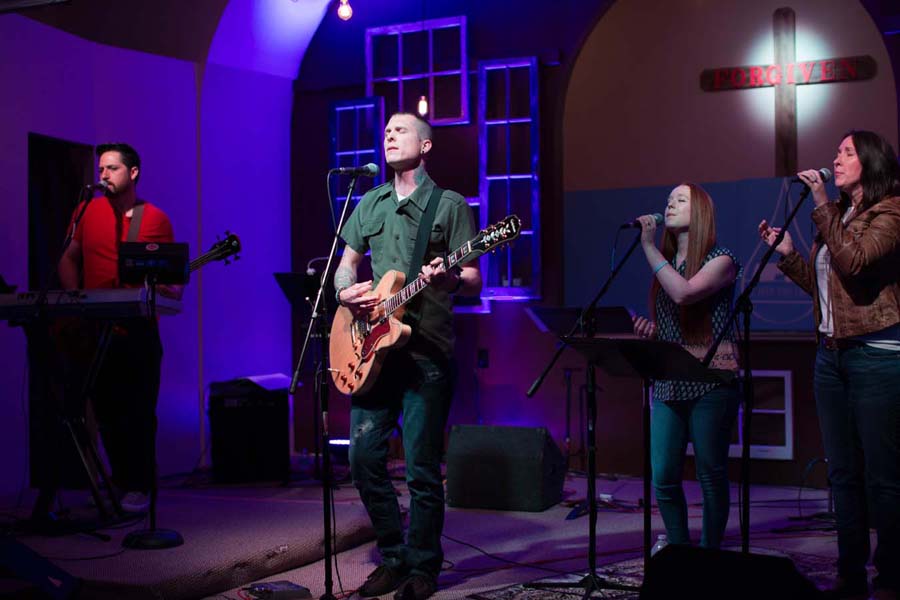 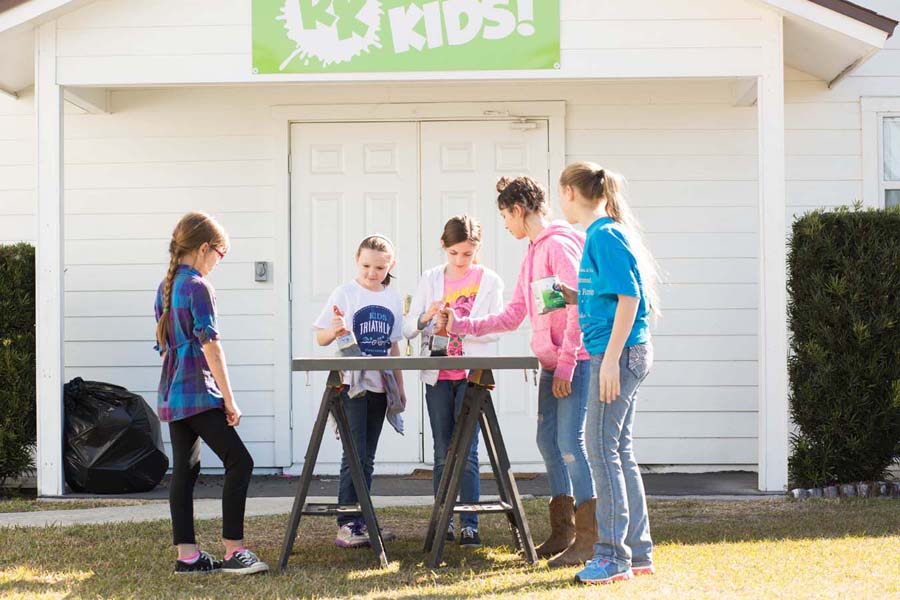 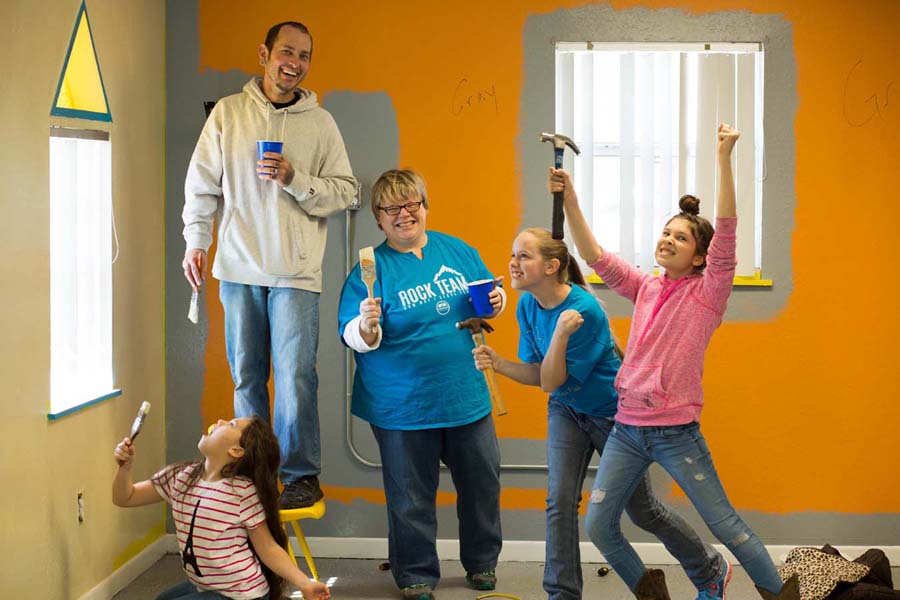 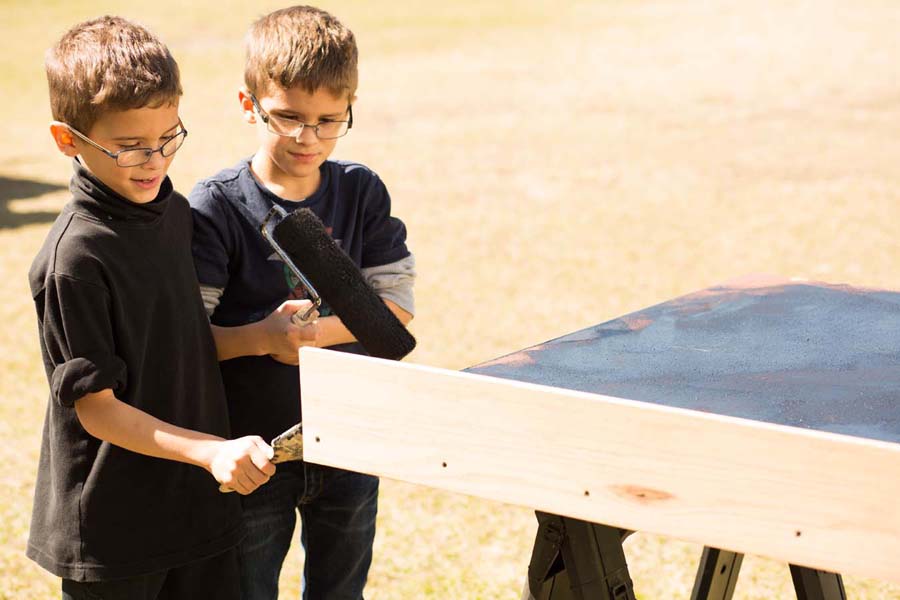 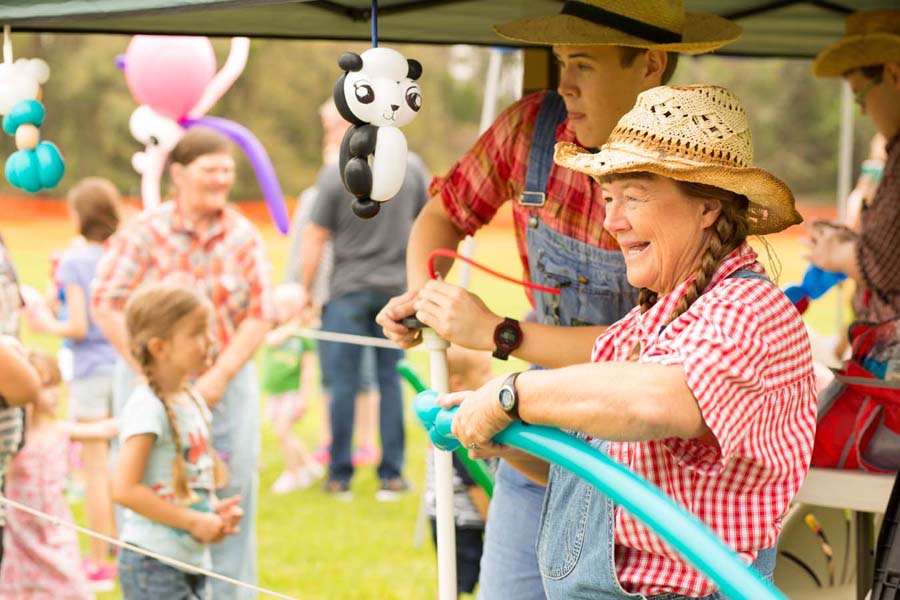 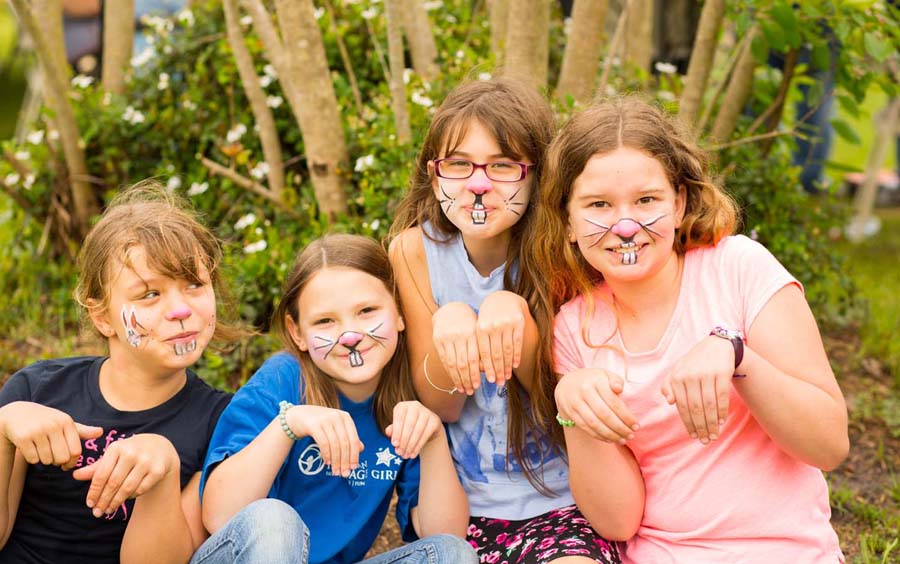 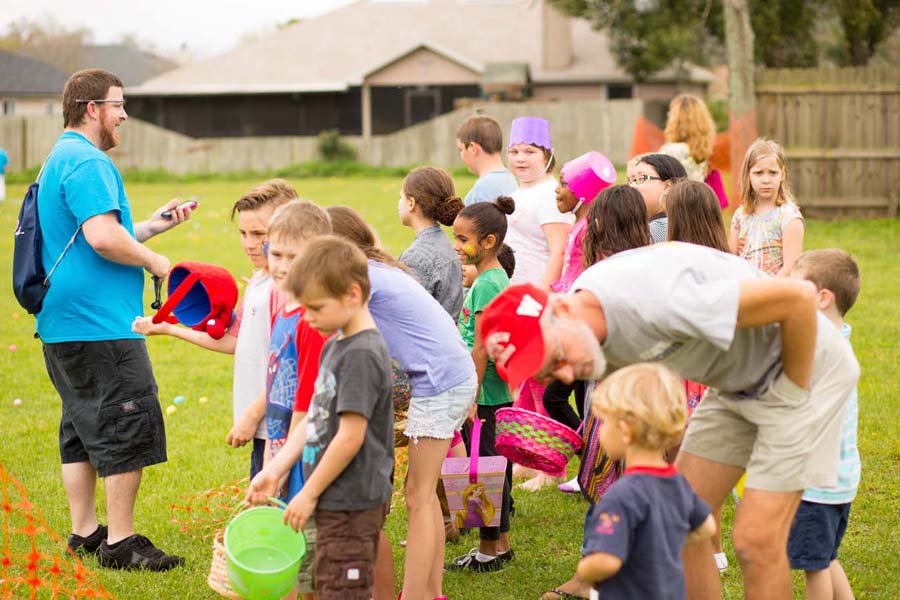 Many Church of the Brethren congregations face the challenge of declining membership and the absence of young adults and families. This concern often occupies the pages of Messenger and our conversations at district and Annual Conferences.

There is one new congregation among us, however, whose experience is the opposite. The Rock Bible Church in Atlantic Southeast District has witnessed rapid growth during its two years as a congregation. Beginning with 15 members of the former Clay County Church of the Brethren, The Rock Bible Church has rapidly grown to over 250 in worship under the leadership of pastor Nate Mattox. With a contemporary style of worship and small group ministry geared toward young adults, families, and children, this new congregation is making its presence known in Atlantic Southeast District.

A struggle to hear God’s call

In one sense, The Rock Bible Church is over 100 years old, and the congregation’s story begins out of that history. Clay County Church of the Brethren ministered to the Middleburg, Fla., community for over 100 years. Three years ago, the congregation of about 50 members was looking for a children’s pastor. To aid their search process, they placed an advertising sign in the church yard.

The Middleburg area was home for Nate Mattox, a graduate of Baptist College of Florida and current graduate student at Liberty University. He and his family had previously served at Fellowship Church in Atlanta, before returning home to Clay County, Fla., seeking to raise their family and serve in church leadership there.

Mattox inquired about the job at Clay County Church of the Brethren, and he and his family attended worship the next Sunday. When they arrived, they were warmly greeted by an older man serving as head usher that day. But it was quickly apparent that there were no provisions for any children’s nursery or ministry.

“We greatly appreciated their willingness to care for our children,” he says, “but the lack of an established children’s program was unappealing.” They found the traditional style of worship “difficult”—in part because of what they were used to in their former congregations. They decided to not pursue the position.

But pastor Charles McGuckin saw something in Mattox and encouraged him. After a sleepless night in prayer and further encouragement from his wife, Brittany, Mattox accepted the position with the assurance that congregation was committed to pursue children’s ministry.

Initially, the changes went well. Office space inside the church building was repurposed into attractive children’s ministry space, and outreach efforts were undertaken with some success. But after nine months of work, the continued changes were more difficult than the congregation was willing to pursue. McGuckin retired, and nearly 35 members of the congregation stopped attending shortly thereafter. This was a painful time in the life of Clay County Church of the Brethren, and it was a very difficult transition.

The remaining 15 members were committed to continuing ministry in that location. Calling Mattox as pastor, the congregation allowed a long season of ministry as Clay County Church of the Brethren to die, so that The Rock Bible Church could be born.

Approximately one-third of those in attendance weekly are children and youth. Growth has come largely from individuals who attended church as youth, but left when they went to college. Many of these people decided to return to church after their own children were born, but were looking for a different experience at this point in their lives. Along with those returning to church, the congregation has also baptized 40 new Christians in the past two years.

The church’s leaders are focused on their vision statement: “To be a church where people can know God at their own pace.” Ministry is based on four “rings.”

The center of their ministry (ring 1) sounds quite familiar to Brethren: a focus on Jesus. Their great desire is for all people to have a living relationship with Jesus Christ that influences their home life, their marriage, and their outlook on the world.

Ring 2 is the atmosphere of the church. This ministry focus concerns everything that happens on Sunday morning: preaching style and content, songs led by the worship band, children’s ministry, the arrangement of art in the sanctuary, and the cleanliness of the building. One question leadership consistently asks of potential new endeavors is “will it upset this ring?” If it does, then the idea—however potentially beneficial—will not be pursued.

The third ring is about advocates. These are the members and regular attenders of The Rock Bible Church and the congregation’s focus on discipleship ministries. Pastor Nate and the other leaders want ministry that builds disciples, believing that if people are focused on following Jesus (ring 1) and the atmosphere of the church (ring 2) is being done well, then people will naturally invite people to worship, or to a ROCK group—one of the many small groups available for persons of all ages.

Ring 4 focuses on advertisement. More than just ads in the paper, advertisement covers anything the church does outside the four walls of the building. It is no surprise that mission and outreach ministries fall under this category, but so does the way the grass is cut, a community Easter egg hunt, or a flier posted in a coffee shop advertising congregational ministries.

Atlantic Southeast District and The Rock Bible Church are working together to ensure that this large, young, rapidly growing congregation is both nurtured and received by other congregations in the district. At their most recent district conference, delegates approved a significant financial contribution to the church, as well as calling Mattox to serve on the program and arrangements committee. In return, The Rock Bible Church contributes financially to the district budget, and has offered to assist other congregations with website development and children’s and family ministries. District executive Terry Grove serves as a mentor to Mattox.

In the meantime, the leadership of the church continues to wrestle with a sanctuary that is quickly becoming too small for even two worship services. Worship attendance on Easter Sunday this year was 345, and the congregation has already noted a pattern of “this year’s Easter attendance becoming next year’s average worship attendance,” according to Mattox.

The Rock Bible Church has a different atmosphere than most Church of the Brethren congregations. Because of this, their experience has the ability to show other congregations one way to be successful in outreach to young adults and their families.

Tim Harvey is pastor of Oak Grove Church of the Brethren in Roanoke, Va. He was moderator of the 2012 Annual Conference.