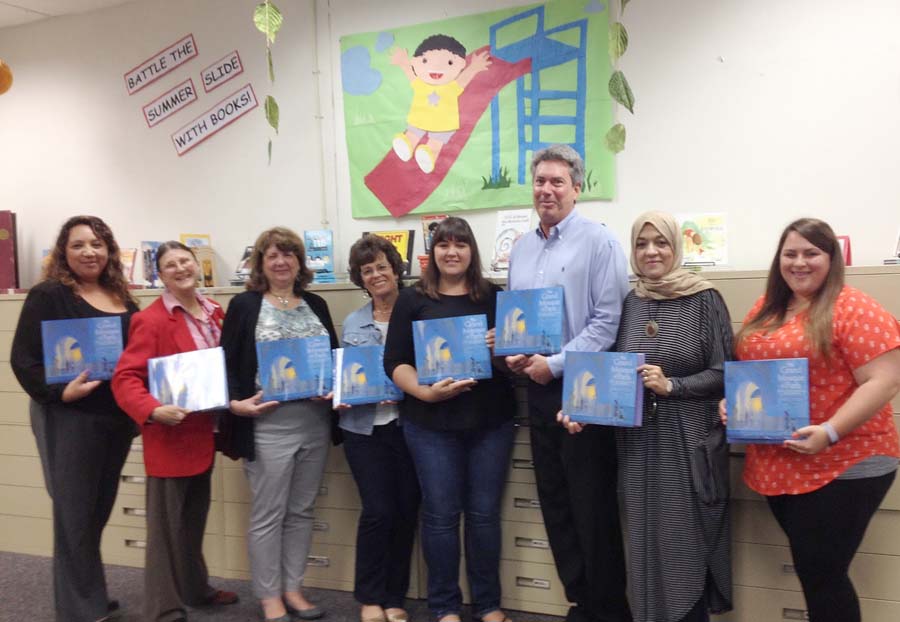 Books donated to the San Diego school system with help from CAIR and the synagogue. 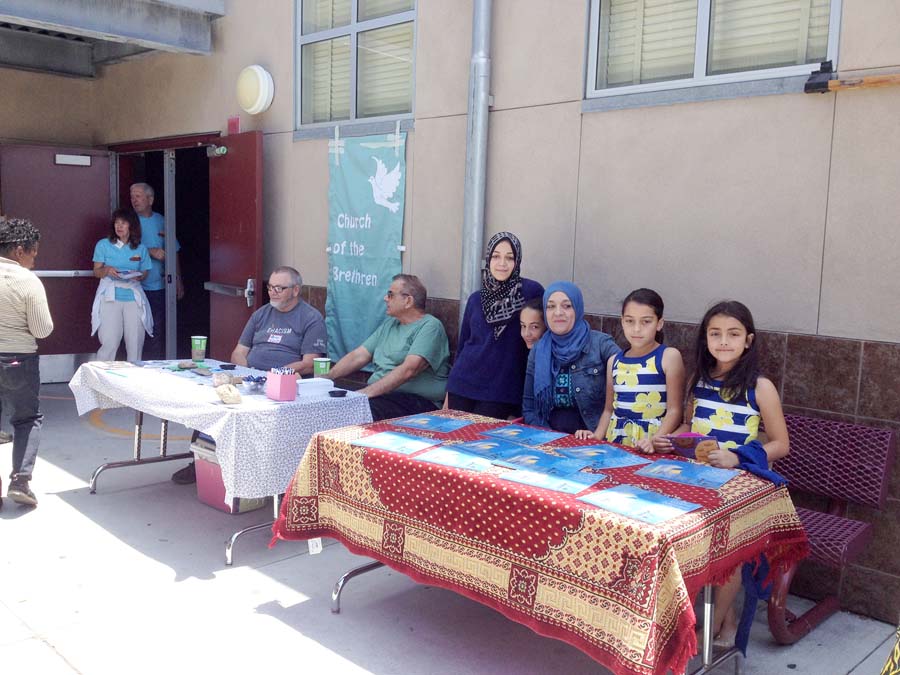 First Church of the Brethren and the Islamic Center host side-by-side tables at a Compassion Event in San Diego. Photo by Linda Williams. 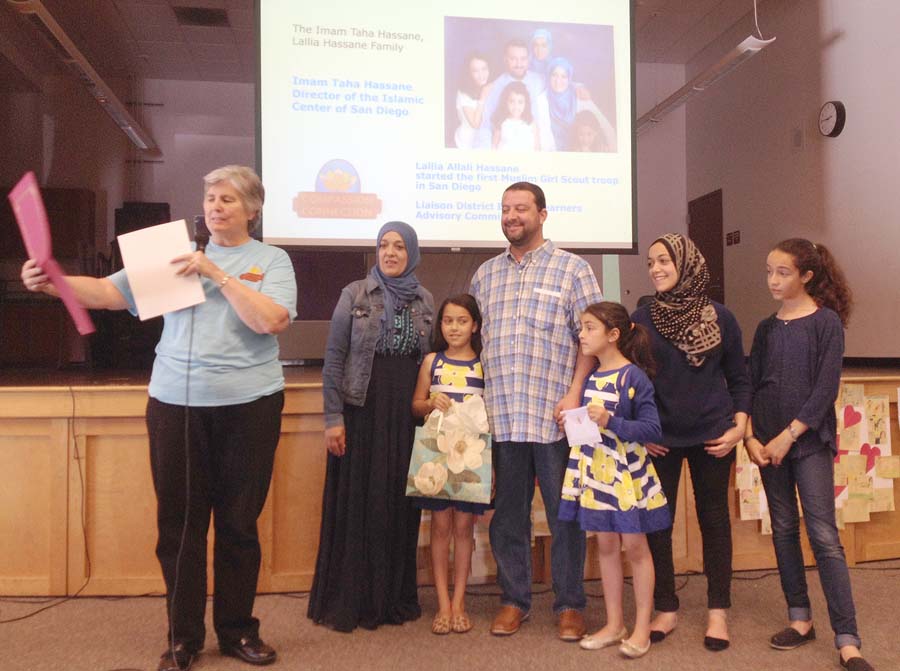 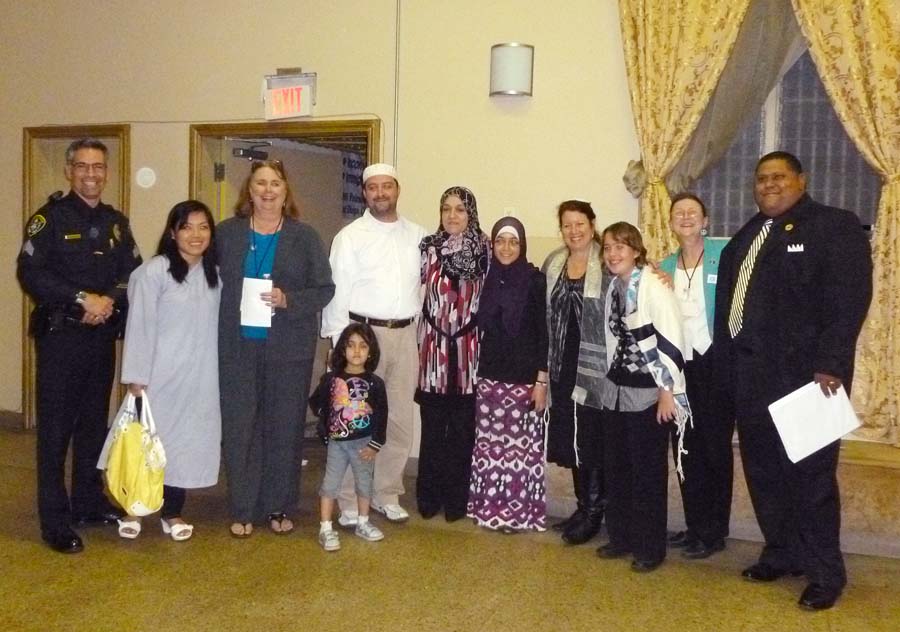 Interfaith event – Standing Together in Prayer for Peace. 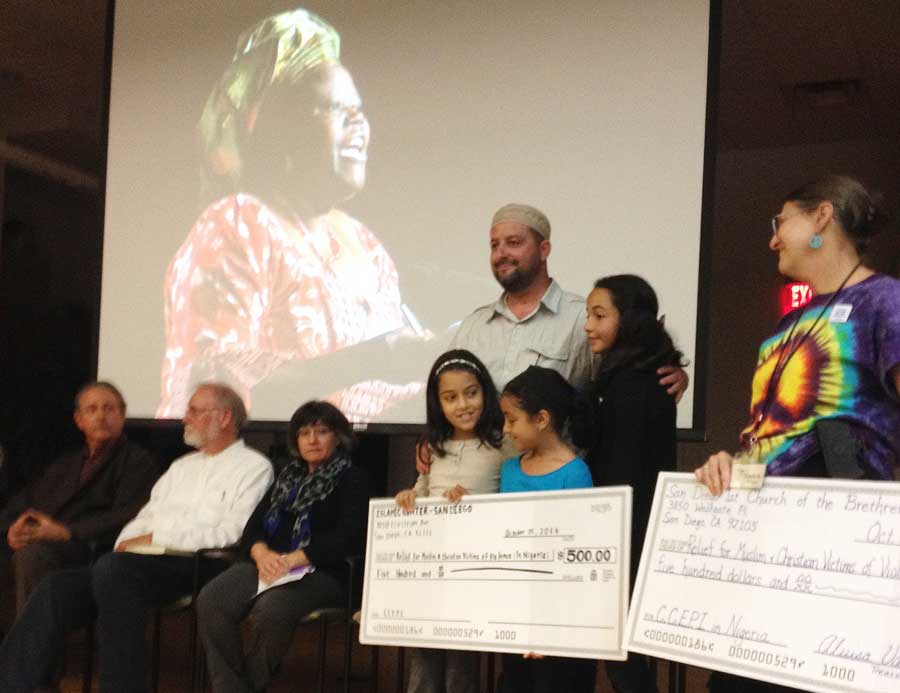 The Islamic Center raises money for Ekklesiyar Yan’uwa a Nigeria (EYN, the Church of the Brethren in Nigeria). 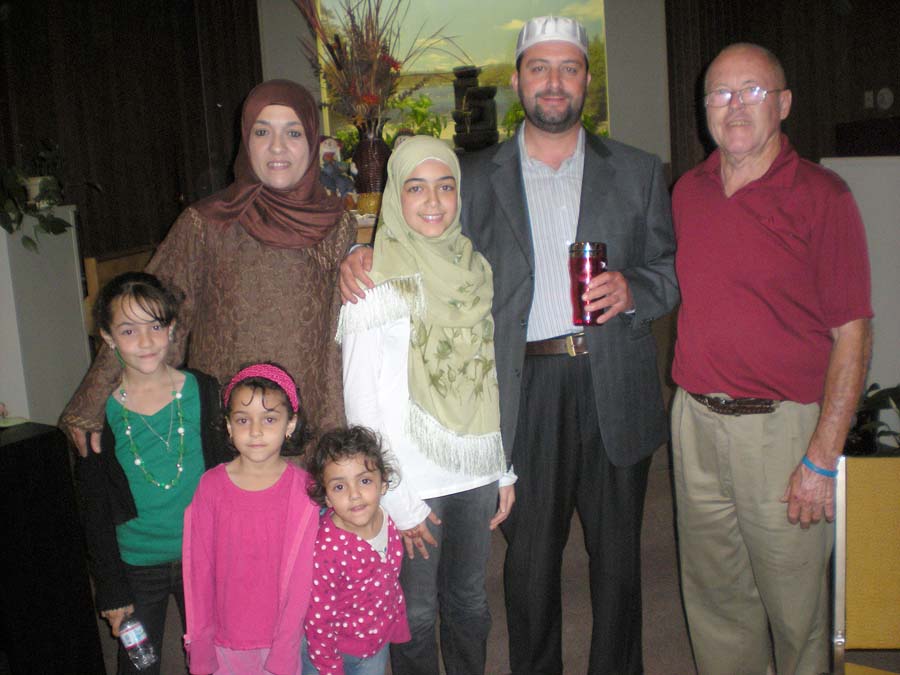 Imam and family at the Church of the Brethren for Peace Day. Photo by Linda Williams. 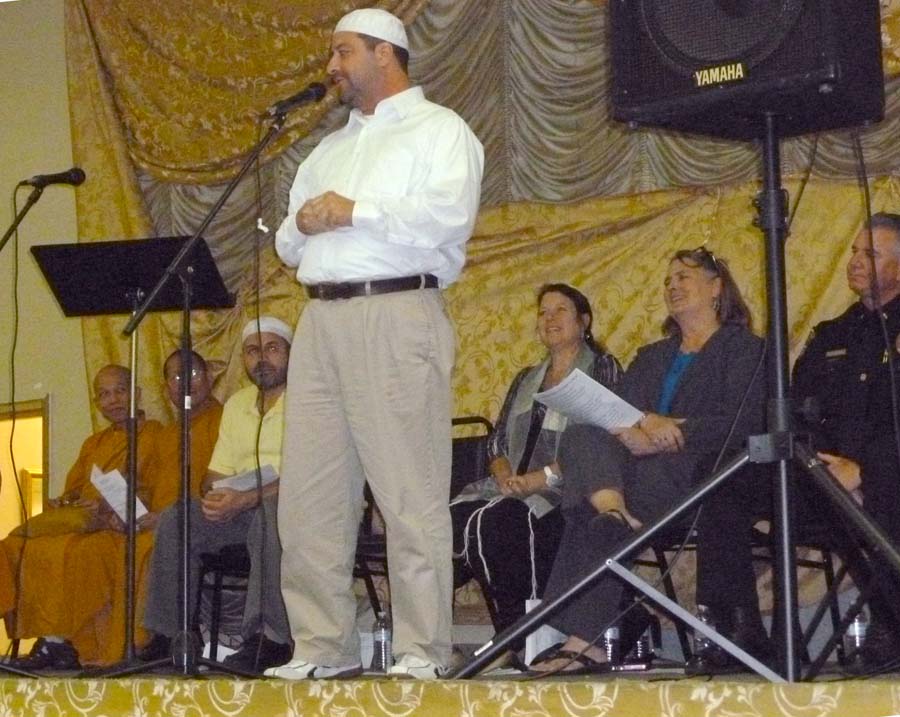 Interfaith event – Standing Together in Prayer for Peace. Photo by Linda Williams. 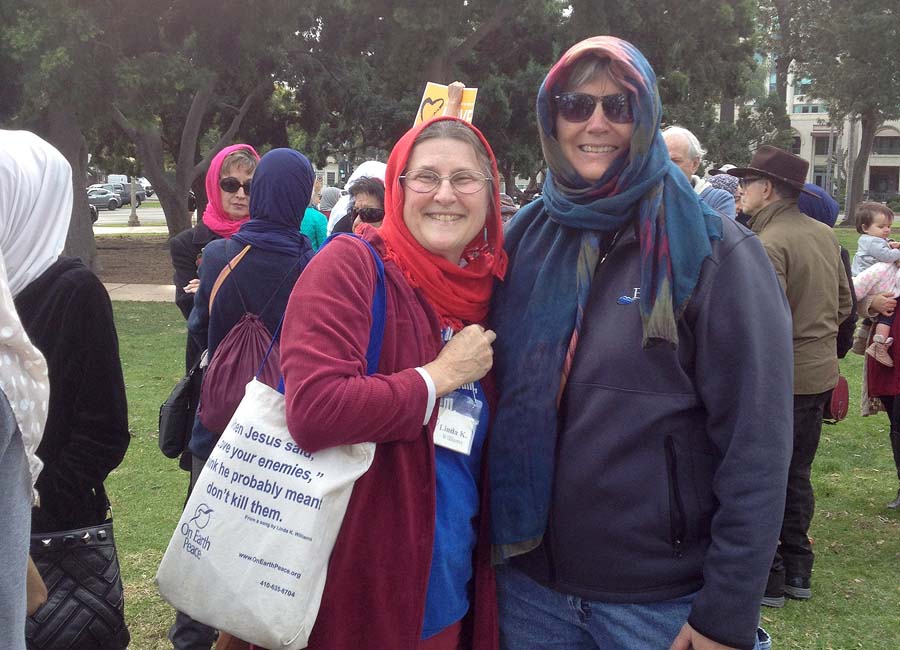 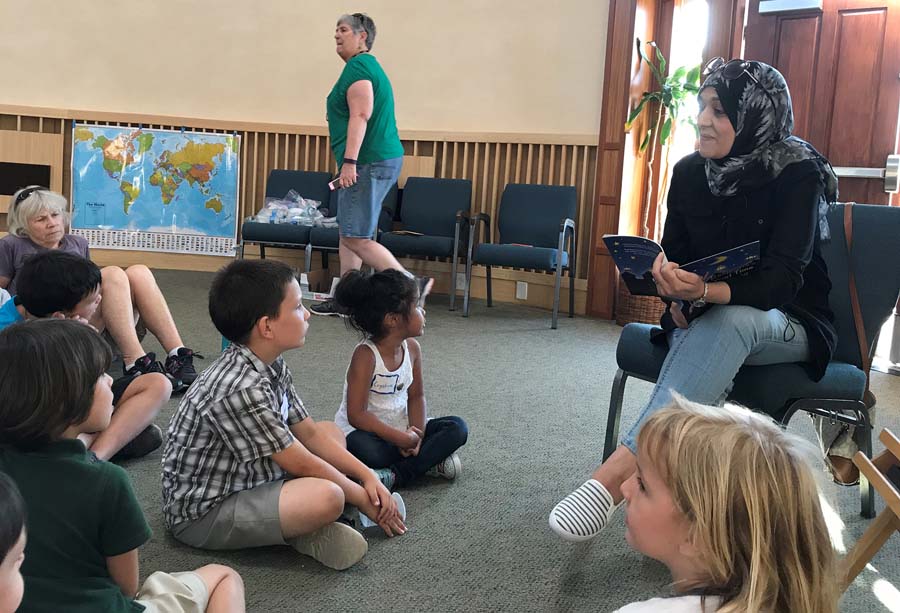 Lallia Allali reading a story to participants at Peace Camp, hosted by the Church of the Brethren and the Peace Resource Center of San Diego. Photo by Linda Williams.
Previous Next

All too often the divisions between us grow deeper and deeper until neighbors have only fear and scorn for one another. Careless rhetoric, targeted jokes, open scorn and insult—what is heard in the home is heard in the classroom and the trauma of a childhood spent in fear and subjugation leaves scars that can last generations.

Today, Muslim children in the United States are suffering from systemic bullying. In a 2014 California-wide survey of 621 Muslim students, one in five reported offensive comments by school staff. Half of the students surveyed reported harassment by other students. The problem has only intensified since then.

First Church of the Brethren in San Diego, Calif., has been blessed to stand with a multifaith community in an effort to fight Islamophobic bullying in our schools. Pastor Sara Haldeman-Scarr met Imam Taha of the San Diego Islamic Center in 2009, and they have been coordinating peacemaking events ever since. That same year church member Linda Williams met Imam Taha’s wife, Lallia Allali, and the pair became fast allies. Allali serves on multiple school advisory committees, and is a board member for the Council on American-Islamic Relations (CAIR) San Diego. In January 2016, First Church worked with our Muslim allies to organize an event called “Standing in Solidarity with Muslim Women,” in response to rising violence.

In response to the rise of Islamophobic bullying, Williams and Allali joined a team of educators and activists including CAIR San Diego’s executive director Hanif Mohebi. They developed and promoted a concrete plan to address the issue. In the past year, they’ve stood up for public comment, navigated a shifting bureaucracy, and held their ground in the face of a toxic misinformation campaign. Theirs is the restorative work of community healing, and their effort is ongoing.

For over 10 years, CAIR has worked within the school community, providing mediation, information, and a forum for community dialogue. As incidents of harassment and bullying of Muslim students became ever more commonplace, CAIR collaborated with San Diego Unified School District to respond to the growing problem. As a result of this partnership, on July 26, 2016, the school district board officially directed the superintendent to develop a plan to address Islamophobia and discrimination against Muslim students.

A team of educators, community leaders, and activists formed a committee and set to work on a proposal. The committee put together resources for teachers—material that demystifies Islam and creates understanding between students from different cultures. They proposed to use practices of restorative justice to turn the act of bullying into an opportunity to build community. In November 2016, the committee submitted the plan to the superintendent and prepared to bring their vision to the classroom.

In February 2017, the school district dispatched the executive director of Student Services to act as liaison for the committee, and prepared a presentation for a board meeting at the beginning of April. The committee collaborated and set an implementation schedule and prepared materials lists for approval. The committee made an immediate action plan to get resources into the classroom in time for Ramadan, a major Muslim religious holiday, in May. The board meeting was scheduled for April 4.

On April 3, their liaison was replaced in a bureaucratic shuffle. On April 4, a new liaison made the presentation to the school district board and 150 members of San Diego’s Muslim community. The plan was unanimously adopted by the board.

For the two weeks leading up to the next meeting of the board of the school district, hopes ran high. The partnership that the school district and CAIR had forged over the course of a decade was poised to bring a real vessel for understanding to the classroom.

But then hate reared its ugly head. At the board meeting on April 18, a man from 65 miles away in Riverside County, Calif., stood up and claimed that the San Diego Unified School District was trying to implement sharia law in its schools.

Subsequently, somebody threatened to murder school board members, the superintendent, and her staff. A rabble rouser from out of state got on Facebook, published the home address of the vice president of the board of the school district, Kevin Beiser, and called for violence. Attorney Charles LiMandri, notorious for his legal defense of gay conversion therapy, filed a lawsuit to stop the school district from taking the plan to the classroom. The attorney acknowledged CAIR’s message of tolerance, but concluded that “CAIR’s ultimate mission is to change American society and advance radical Islam.”

The allegations made against CAIR contrasted sharply with the work already being done. In November 2015, the school district proclaimed that it “recognizes CAIR-San Diego and thanks the organization for its 10 years of teaching students to accept and honor religious and cultural differences among their peers.” The district did its best to educate, responding to the hysteria with a clear description of the program.

Pressure on the school district mounted, and cracks began to show. After a productive meeting on April 20, the school district liaison became nearly unreachable for the next three months. Nevertheless, the committee continued preparing to help implement the April 4 resolution. San Diego Church of the Brethren sent an official letter of support to the board and the superintendent of the school district, applauding the stated goal of addressing Islamophobia and the bullying of Muslim students. The effort moved forward as it could.

Then, on July 24, listening to radio station KPBS, Williams heard that the effort to address Islamophobia was on the agenda for the school district board meeting the following evening, July 25. The board’s new statement read: “Staff is redirected from forming a formal partnership with CAIR.”

It looked very much as though an anti-bullying program had fallen victim to bullying. This was not lost on the board of the school district. In his comments, president Richard Barrera noted that the attacks “simply clarified the experience that our Muslim students are going through every day.” Beiser described CAIR as “a conduit by which parents and students can get a voice” and thanked them for a “partnership of over 12 years.”

In a phone call with Williams on Aug. 18, Beiser sought to explain the board’s July 25 statement and directed her attention to the full language of the directive:

“Staff is redirected from forming a formal partnership with CAIR to forming an intercultural committee which shall include representatives of from [sic] all faiths and cultures and which shall provide input to district staff on issues of cultural sensitivities and the individual needs of various subgroups within our diverse community.”

Beiser clarified, “I’m thrilled that CAIR will definitely have a seat at the table on that new committee.”

The school district already is moving forward. The list of classroom resources that the committee painstakingly compiled is now under review. The committee is pleased to soon be meeting with key contacts in the district to address repairing relationships.

As Williams noted to Beiser, everyone who poured their passion into the effort over the past year hopes for a seat at the table going forward. Theirs is the restorative work of community healing, and their effort is ongoing.

Contact Linda K. Williams at LKW_BetterWorld@yahoo.com for more information about the resources created and compiled by the committee. For a complete timeline of this multifaith effort, see the October 2017 print issue of Messenger.

Craig Frantz and Linda K. Williams are members of First Church of the Brethren in San Diego.