Also known as the Caimito church, for the barrio where it is located, Segunda Iglesia Cristo Misionera (Second Missionary Church of Christ) is one of eight churches in the newly established Puerto Rico District. I visited the congregation last November as part of the Stories from the Cities project.

Caimito is on the outskirts of metropolitan San Juan, and Segunda Iglesia Cristo Misionera has been faithfully serving the community for several decades. Pastors Juan Figueroa and Isabel Martinez have committed more than 30 years to service in Christ’s name. The Caimito church is a congregation dedicated to meeting the needs of its neighborhood, welcoming all to its services regardless of who they are or where they are from. Their story with the Brethren is one of being surprised by love, of a joint commitment to service in Christ’s name, and of partnership and fellowship across boundaries.

Caimito and the Church of the Brethren

Figueroa and Martinez have a long history of doing Christ’s mission work. They met as young people who had each ended up in Haiti, separately, as missionaries. After marrying and then returning to their native Puerto Rico, they took up the leadership of Segunda Iglesia Cristo Misionera in Caimito.

Convinced that Christ’s example involved meeting peoples’ spiritual and physical needs, the two pastors founded the Christian Community Center in 1981. Unfortunately, the denomination they were in at the time was not convinced that such service efforts were an important part of the gospel and the relationship was severed, making it an independent church despite retaining its name. Together, they set out in faith to care for a community struggling with poverty.

While the center was founded in 1981, the couple did not encounter the Church of the Brethren until 1989. That year Hurricane Hugo devastated parts of Puerto Rico, including Caimito. Brethren Disaster Service (now Brethren Disaster Ministries) set about rebuilding homes in affected areas and encountered the work of the Christian Community Center.

The church in Caimito quickly realized that it had much in common with these volunteers from the United States. Cliff Kindy led one of the disaster response teams and began a friendship with the pastors. Figueroa recalled looking at the work of the Brethren and the work of the center and saying to Kindy, “Without the name, we are Brethren! We are doing exactly what we love and what you love to do.”

“We thank God because of the blessing that is the Church of the Brethren. We have met a lot of people and they’ve loved us—and we loved them,” Martinez described. This love and welcome was not something that they assumed would happen. Figueroa explained. “We thought that Americans are Americans and we are Puerto Ricans, that we are different . . . but the love which they showed us surprised us.”

Hospitality, welcome, and inviting Figueroa in 1991 to a leadership position on the Church of the Brethren General Board (now called Mission and Ministry Board): these all demonstrated a Brethren commitment to transcending differences in language, ethnicity, culture, and geography. In Figueroa’s words, “Everybody knew that I was black and poor but they welcomed me.”

The Caimito church became the second Puerto Rican Brethren congregation, after Castañer. Through Caimito, Brethren from Puerto Rico and the mainland US expanded cooperation in workcamps, service, and in peacemaking— including protests over the US bombing policies on the small Puerto Rican island of Vieques.

“The Hole” is part of the Corea neighborhood in Caimito. The neighborhood descends down from the Brethren church building, a steep, windy, and narrow road lined with houses and banana trees. While some of the houses look well-maintained on the outside, the neighborhood struggles with hunger, drug addiction, and crime.

The Christian Community Center, coordinated by the church and its members, tries to meet these needs by providing services at no or minimal cost. Each week, community members benefit from the doctor, dentist, social worker, and psychologist who provide services through the center. Monday through Friday, hot lunches are served for any person in need. In addition to mid-week prayer gatherings hosted by the congregation, Monday nights are art nights, where people in the community can paint and learn handcrafts such as making candles and jewelry. 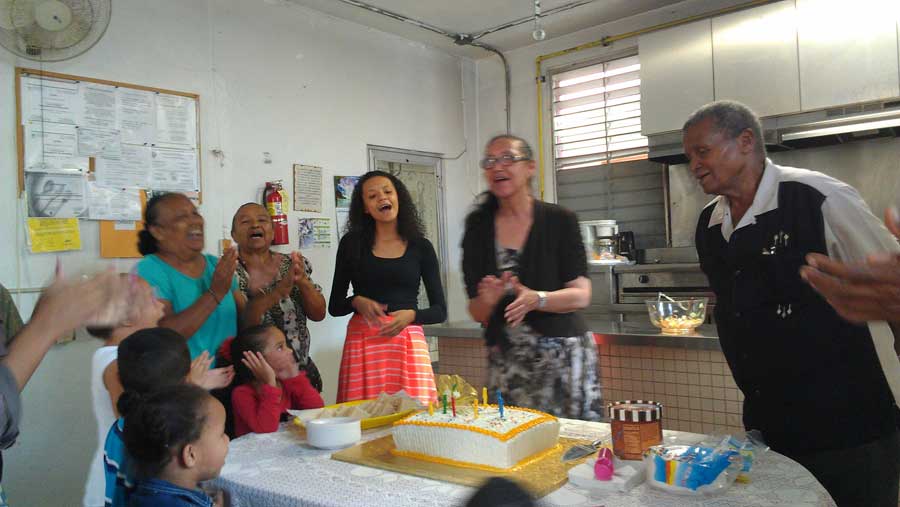 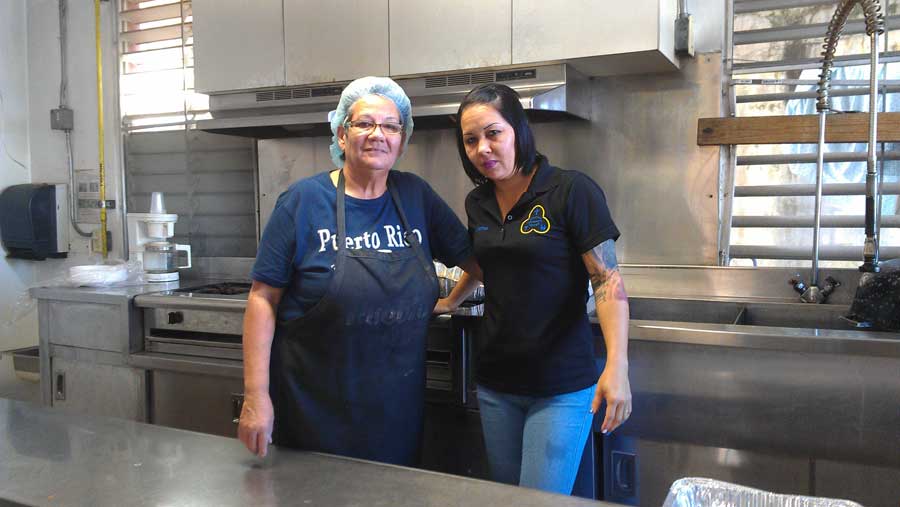 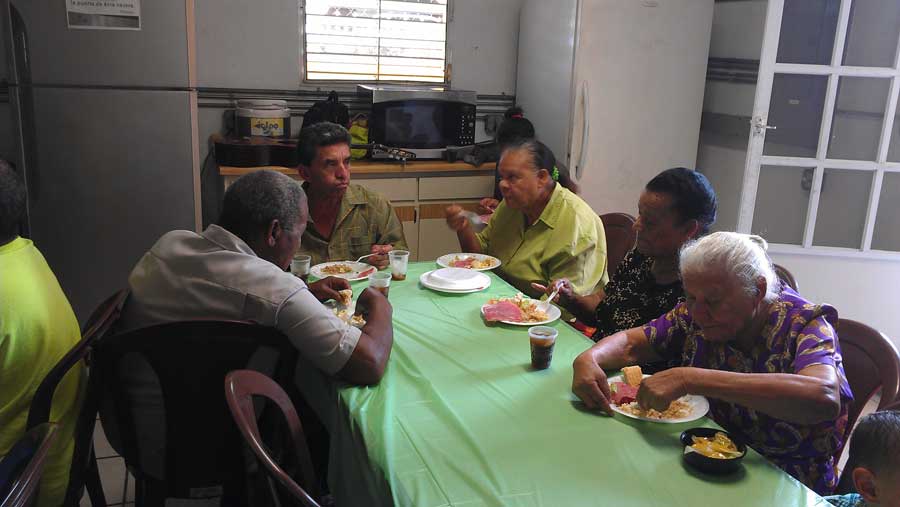 An emerging aspect of the center’s ministry is gardening. Church members are starting to teach basic gardening techniques for patios, something which Figueroa is very passionate about. An empty lot across from the church was cleared by a 2015 workcamp team from La Verne (Calif.) Church of the Brethren and beautified with a mural. Figueroa has since planted vegetables and more fruit trees, to serve as a demonstration garden and to supplement food purchased by the center for the hot lunches.

Serving the community is a core value that shapes the church’s work and membership. Rebeca Zabala got to know the center’s work “serving people in need” and it “touched” her. She joined the church and later became a cook for the lunch program. Another member, Evelyn “Tita” Rosario said the combination of “serving the community and preaching the gospel” is a main strength of the church.

Segunda Iglesia Cristo Misionera is a very small congregation, with around 20 people at worship on the Sunday I visited. Yet its members are “very dedicated” to its work in the community and has a larger impact than its size, according to Shirley Baker. Upon retirement, she moved to Caimito from Western Pennsylvania District to serve as the center’s secretary, following 15 years of visiting and serving through work camps.

While commitment to service is a strength, Rebeca Zabala explained that “making a difference in the people around the church is a challenge.” Said Tita Rosario: “Working with young people is also a big challenge,” especially due to the issues of drugs in their community. A lack of jobs in Puerto Rico’s struggling economy—and the accompanying future uncertainty—seemed to be a contributing factor to the community’s hardships.

Money is a challenge for the center too, as they recently lost a sustaining governmental grant that provided a significant portion of their budget. Martinez explained that appeal letters have gone to potential supporters, but it is still uncertain where the needed funds will come from.

What lies ahead for the Caimito church and its Christian Community Center? Church members expressed a desire for increased reach of the gospel and of the center’s ministries. However, it is uncertain who exactly will be leading these future efforts. Figueroa and Martinez, both in their late 70s, have been building up leadership skills within members of the congregation and foresee leadership transitions in the near future. They hope new leadership emerges from within the church and the center.

Continued and strengthened relationships between US churches and Puerto Rican churches is something the two pastors also seek. Workcamps from US Brethren, such as ones from La Verne Church of the Brethren and Western Pennsylvania District, are crucial to maintaining the center’s physical space and to keeping ties between US and Puerto Rican Brethren.

There are numerous barriers to close relationships between Puerto Rican and continental churches: language, culture, worship styles, food, and a big geographic distance ( just under 1,000 miles from Miami). But as Figueroa said, the differences can be overcome. US Brethren visit and “they don’t care about my English. I don’t care about their Spanish. We are one family.”

The connection in Christ and through the Church of the Brethren provides a way to break down barriers. At the end of my visit, this question remained with me: How can we work to make “every effort to maintain the unity of the Spirit in the bond of peace” (Ephesians 4:3) with our sisters and brothers in Puerto Rico?