One of the first two English slave ships to carry West Africans to the New World was named Jesus. Its captain was Sir John Hawkins, known as the first English slave trader. According to journalist Michael Eli Dokosi, he persuaded West Africans to gain salvation by boarding the Good Ship Jesus, as it was sometimes known, and then sold them in what is now the Dominican Republic. Can there be a worse case of taking the Lord’s name in vain?

As part of the reckoning that we’re seeing in many parts of the world, Hawkins’ hometown of Plymouth, England, announced in June that it will change the name of Sir John Hawkins Square. While there had been complaints over the years, the need for change became more urgent in today’s bracing air.

Hawkins sailed Jesus to the New World in 1562. Four hundred and one years later, white supremacists bombed the Sixteenth Street Baptist Church in Birmingham, Ala., and killed four girls. In the blast, there was strange damage to a window that depicted the familiar image of Jesus knocking at a door. The entire window survived except for the white face of Jesus, which was blown away.

What does it mean for the white face of Jesus to be blown away?

The image of Jesus that is likely most familiar to Christians in the US is Sallman’s Head of Christ. That 1941 painting of a blond, blue-eyed Jesus has been reproduced more than 500 million times—much more, if you count its appearance on merchandise. The original painting was well-intentioned. But the way this and other images of a white Jesus have been used in America is not harmless. One could say that we have broken the commandment by making a graven image—a white God.

Perhaps the early Brethren were right to keep their meetinghouses unadorned. Perhaps they were less tempted to make God into their own image.

What images and structures do people of faith need to examine today? In our churches, what monuments have we constructed? Not all monuments are made of stone. Are we willing to look unflinchingly at the ways Christians over centuries have taken the name of Jesus in vain?

Wendy McFadden is publisher of Brethren Press and Communications for the Church of the Brethren. 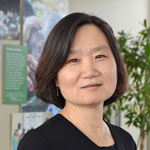